Ormiston South Parade achieved Gold: Rights Respecting at the start of January 2019. We took 60 seconds with  RRSA Coordinator for Ormiston, Gabrielle Harding to find out more about their success.

Tell us a bit about yourself. How long have you been a teacher? What do you enjoy most about teaching? How long has your school been involved with UNICEF UK?

I have been a teacher for four years, my first year being my training year as I entered teaching through the Teach First programme. I am originally from Bedford but was placed in Grimsby to work at Ormiston South Parade Academy where I have remained since. We have been involved with UNICEF UK since September 2016, we gained our Recognition of Commitment (now Bronze) in December 2016 and Silver: Rights Aware in November 2017. I have lead RRSA since January 2017.

What led your school to become involved in the Rights Respecting Schools Award?

As an academy in a deprived area we have read about how the RRSA impacts on pupils’ confidence, learning and behaviour in a positive way. We were also keen to give our pupils new opportunities and improve pupil voice in the academy as well as broadening pupils’ horizons through developing opportunities for global citizenship to be explored.

Give us an example of an initiative or an activity that your school has done that pushed the working you are doing with RRSA forward?

One of the first things we did when we decided to work towards the RRSA was change all of our class names from 3H, for example, to countries. The pupils worked together to compile a list of countries they were interested in and then SLT used this to name the classes. This has been a brilliant base for learning about other countries, looking at their social and economic development, their politics and their culture. As well as pupils and staff putting on assemblies about their countries, learning different languages and making links with those countries. This decision changed the whole culture of our academy.

What challenges have you faced in putting the Award in place your school and how did you overcome them?

One of the challenges was ensuring that the Award was not regarded as ‘another thing to do’ by teachers. I overcame this in two ways. The first way was to stress the impact we were making on our pupils through the Award and how it was important that we did it for them. The second way was to make everything as simple as possible for teachers, I’d try things out with my own class before sharing it with them, share resources I had found via email, introduce simple activities they could do in class during meetings and make use of assemblies to introduce rights-based learning to the pupils.

What has been your proudest achievement in putting children’s rights in to practice in your school?

I have so many proud moments as the RRSA lead. I think our steering group, our ‘Rights Champions’, are my proudest achievement. The development I have seen in them has been incredible and their knowledge of the rights and Sustainable Development Goals is amazing. The compassion that they have developed and their commitment to making the world a better place sets a fantastic example to our other pupils. They have lead assemblies, conferences, meetings with governors and fundraising days. They are obsessed with the rights and I couldn’t do my job without them.

What advice would you give to other schools working towards Gold?

I would say that visiting other Gold schools is a great opportunity to share practice and make links with other RRSA schools. It’s a great way of getting new ideas and confirming that you are doing the right thing. It’s also a lovely opportunity to have a chat with like-minded teachers and widen your own support network. Gabrielle Harding has been the RRSA Coordinator at Ormiston South Parade since the school began its RRSA journey in 2016. 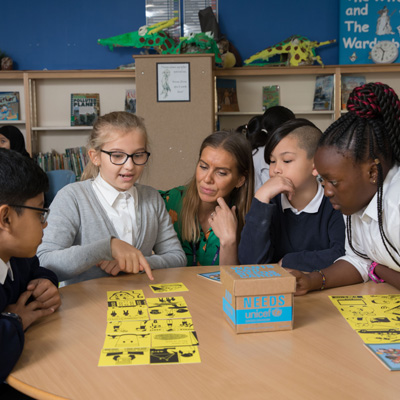