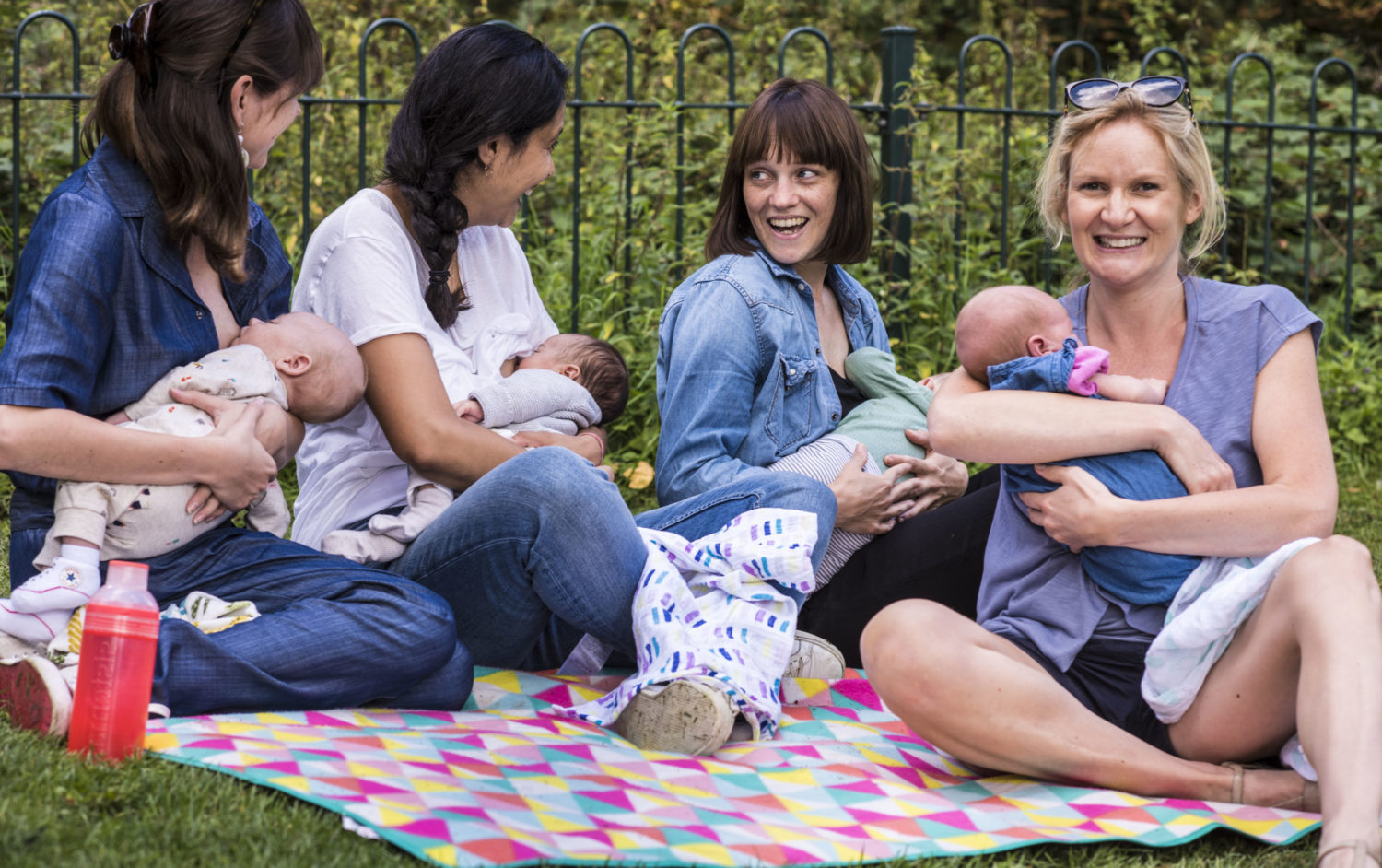 This guest blog from breastfeeding counsellor Emma Pickett discusses the dangers of promoting a strict feeding schedule at the expense of responsive, flexible infant feeding.

Somehow, somewhere, new mothers got the message that the gap between when a baby stops a breastfeed and the time they start to need another one matters a very very great deal.  24 hours a day.

It seems to matter beyond all logic and reason. They see this magic number – 90 minutes, 2 hours, 3 hours – as a measure of something sacred.

There are mums sitting at home, relaxing and nesting with their gorgeous new baby. There’s a disk from a box set in the DVD player, a cup of tea on the go, a recent chat with a friend. Breastfeeding is going well.  Weight gain is fine.  Baby is content. But when baby shows hunger cues after only 40 minutes instead of the hoped for 1 hr 30 minutes, their heart sinks and they feel a sense something is fundamentally wrong. They aren’t ‘doing it right’. Their friend’s baby ‘goes longer’. Doubts creep in.

As adults, we grab a cup of tea, a glass of water, a sweet, a snack. We respond to our personal cues and we’re flexible depending on time of day, the temperature, our mood, our energy levels. Many go to bed with a glass of water or sip from a bottle throughout the day. I don’t know any adults that look at their watch and say, “Only 30 minutes till my next sip of water or mint!  Not long now”. But yet we expect teeny growing babies to be governed by this artificial notion of time.

I spoke to a new mother last week who was perfectly happy with her feeding routine but wondered if she should start to stretch her baby’s intervals because ‘that’s what you do’. When I explained that it wasn’t necessarily, she said she was more than happy to go on as she was.

Where do these ideas come from? They don’t come from anyone with any breastfeeding education, nor antenatal classes with breastfeeding professionals, nor books written by those trained to support breastfeeding.

They come from popular baby care books and relatives and peers.

They seem to come from a fundamental misunderstanding of the science of breastfeeding and breastmilk production.  Often they come from mid-20th century ideas based around the norms of formula-feeding and pseudo-science. And that’s all incredibly dangerous.

It’s scary and extremely frustrating that basic messages about how milk production works don’t reach the people who need them.

So what is normal? Well, how long have you got? Because there’s a lot of normal.  A newborn should feed a minimum of 8-12 times in 24 hours. That means some might be going every 3 hours and others will be feeding more frequently than 2 hourly. Some babies may feed every 10 minutes every hour. Some may feed for 10 minutes every 2 hours. Some may feed for 40 minutes every 2 hours. For periods in the day, a younger baby will often cluster feed and not be happy away from the breast for any longer than a few minutes at a time. This natural cluster feeding may dominate an evening.

A very common call to the National Breastfeeding Helpline goes like this: “My baby used to sleep in the evenings and now he’s awake for 3-4 hours. The only thing that seems to settle him is the breast. I feel like I must not have enough milk as he’s on there for ages. Surely there can’t be anything there.” As the baby swaps from breast to breast, getting small quantities of very high fat content milk and decompressing at the end of a long day, they know exactly what they are doing.

And soon their patterns will change again. Some babies will start to longer intervals in the day as the months go by. But not all will.

One of the most popular babycare books (which I better not name) gives a strong direction that while frequent feeding might be occasionally acceptable during growth spurts, this holy cow of the interval between feeds matters greatly.  A 3 month old baby might be going 3 hourly intervals but if this isn’t increasing at 4 months, then oh dear. This same writer believes a woman can measure her milk supply by doing a yield test and using a pump to extract milk which apparently will be the equivalent amount to what her baby extracts during a feed using an entirely different process. What this woman doesn’t know about breastfeeding could fill an encyclopaedia.

What I find particularly dangerous about her message that longer intervals are ‘better’ and ‘correct’, is that is means new mothers doubt their milk supply with absolutely no justification. And I know from having spent time on the message boards associated with this writer, many mothers will end up supplementing with formula to try and reach these magic numbers of minutes.

Babies are no longer being exclusively breastfed and parents are not following Department of Health recommendations because of incorrect information in a baby care book.

There are parents who choose to use formula for a whole host of complex reasons. Some do so happily and some do so miserably. But to do so, merely because you have read a lie in a book, seems tragic to me.

Our knowledge about breasts has been transformed over the last 20 years. Much of the pioneering work has been done in Australia by scientists like Professor Peter Hartmann and Dr Donna Geddes, Steven Daly and their teams.

We used to think most women had a pretty similar number of milk ducts but the ultrasound research revealed there were less than previously thought and the range was big. One woman had 4 ducts at the nipple. One had 18.

But it’s the findings about breast storage capacity that we need to talk about here. When a baby feeds, some milk is manufactured during the feed itself and some is taken from milk that has been stored in the breasts between feeds.

One mother was able to store about 2.6oz per breast.  Another woman stored more than 20oz. That’s not a typo.

Is this a mother with a supply problem?

But let’s imagine the mother with the smaller breast storage capacity has read this baby care book. She might become distressed that her baby still wants to feed 2 hourly. She might even try and stretch the interval between feeds in the mistaken belief this will increase her baby’s intake. And in doing so, her breasts spend longer at full storage capacity and their milk production slows and her breasts receive the signal to decrease milk supply.

So in her attempt to stretch between feeds as the advice she is reading suggests she does, she may actually be decreasing her overall milk production in 24 hours and be doing some actual harm.

So what should we suggest to this mum who never seems to be able to stretch her baby to longer intervals in the ways that her friends seem able?

First off, we should congratulate her for responding to her baby’s cues. Thankfully she knew not to try and impose some routine early on and therefore her milk supply is at its maximum capacity. Let’s check breastfeeding is otherwise going well:  that feeds are comfortable for her, baby does settle for periods of contentment after a feed (though it may only be an hour or even less, rather than 3), weight gain and nappies are fine and latching and positioning is at maximum efficiency. If all this is true, and never reaching a magic ‘interval’ is her only concern, then we need to make sure she knows as much as possible about how milk production works. It is possible she is one of the mothers who has a minimal breast storage capacity and she will need to feed more in 24 hours to maximise the volume of milk her baby receives. And there might be nothing she can do about that. What happens next is about acceptance and support and attitude.

She has to keep that up for ideally around 6 months if her baby is going to get the full benefits of exclusive breastfeeding. She might need greater support with feeding outside the home – perhaps learning how to feed in a sling or experiment with different positions for different environments. It’s possible she may be woken at night more than her friend with the longer intervals – though we would expect night time intervals to be longer and for her to get a block of longer rest. She may benefit from support on safe bed-sharing practices.

And it is just a matter of months. After solids have been established, patterns will change. It’s surprising what we can cope with for just a few months. We have jars of pickle in our fridge significantly older than that. We may even have toothbrushes that are around that long. In terms of an adult lifetime, it’s a blink of an eye.

What won’t help these mothers is the relentless message that they just need to stretch their baby a little more. That if they leave him to cry for 15 minutes, magically he will take more milk and life will change. That just isn’t what science tells us is true for all women.

Responsive feeding: So much more than milk

Of course breastfeeding isn’t just about milk anyway. Apparently there are people who think that a baby comes to a breast primarily to get milk but I’ve not met a parent of a baby who thinks that’s true. Just as we don’t measure our sips of water, sweets and snacks, we also don’t measure every time our family smiles warmly at us, communicates with us, looks for comfort, hugs us, checks in, helps us to feel safe. No smart phone app can measure all the complexities of our relationship with our baby and all the things that responsive feeding can do. You are trying to count and measure love.

And I’m talking about myself here, by the way. My children under 6 months never went longer than 2 hours between feeds in the day and not much longer at night. My red record book records me feeding at 3 months every 90 minutes or so. So I learnt to feed while babywearing. I went to friendly groups and friendly places and met up with people at home. I read about safe co-sleeping practices which I know beyond a shadow of a doubt saved my bacon. And thankfully, I never felt anything was ‘wrong’. I just trusted my body. I trusted my baby and we worked as a beautiful team. I sat at home on the sofa and fed relatively frequently, enjoyed my box sets and my healthy and not-so-healthy snacks and that was OK.

It really wasn’t for long. But the benefits of exclusive breastfeeding will be.

Why should a watch or clock tell me how to be a mother? I’d rather pay attention to my baby.

Guest blog: "Is this normal?" The first week with a breastfeeding newborn

Other Organisations and Resources