Musician Jessie Ware has been a dedicated supporter of UNICEF since 2014 and is a passionate advocate for our work. Jessie has a particular focus on our response to the global refugee and migrant crisis.

In December 2017, Jessie visited Bangladesh to meet refugee children and families who have fled from their homes in Myanmar and are currently receiving support from UNICEF. We’re providing Child-Friendly Spaces, where children can learn, play and just be children again. Jessie saw hand-drawn pictures from the children at the centre, which featured scenes that children should never see: military men with weapons and machetes, villages and houses being burnt down and bodies scattered on the ground.

Jessie also saw life-saving immmunisation programmes funded by UNICEF, which protect children from measles, diphtheria, polio and rubella, and therapeutic feeding centres where children are weighed, measured, and given ready-to-eat food to prevent and treat malnutrition. 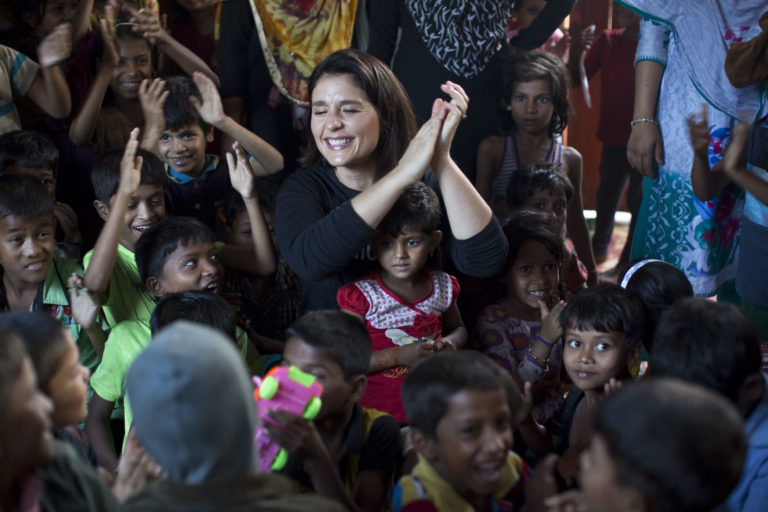 I met a woman called Hasina who told me her story.

Her little girl was two-and-a-half, but looked smaller than my 15 month old. She told me about her journey, her experience and what she has seen.

She’d watch her husband and two of her children being killed in front of her and her two other children.

£74 could help pay for school supplies to help at least 20 children continue their education in an emergency.

£23 could provide a child with ready to use therapeutic food for a month in an emergency.

In 2016, Jessie visited the former Yugoslav Republic of Macedonia, where UNICEF are providing support to refugees making the dangerous journey to Europe. Jessie met a mother who had made the harrowing 4,500 km journey to Europe (from Afghanistan to Iran, then Turkey, on to Greece and finally in to Macedonia) whilst pregnant in search of safety and a better future for her children.

Jessie’s first visit to see UNICEF’s work was back in 2015, when she went to Cameroon to see the vital work UNICEF is doing to support refugee children and their families. She visited Gado refugee camp where she met children who had fled from violence in the neighbouring Central African Republic. Violent conflict in the Central African Republic has made it one of the most dangerous places in the world to be a child with Cameroon currently hosting more than 255,000 refugees.

Later the same year Jessie performed at the annual UNICEF Halloween Ball, helping to raise more than £1.6 million for the children of Syria. Your gift could save a life